The mission of the Kennett Consolidated School District is to provide a quality education that increases the achievement of every student in order for all to become successful and thoughtful contributors to society.

"Bancroft Elementary School is dedicated to creating a safe and rewarding educational experience for all children. Our goal is to focus on student success by fostering a positive, accepting and supportive learning environment where students are proud of the work that they do each day."

"Greenwood is comprised of hardworking students and dedicated teachers who measure success, not only in high-test scores, but also in lessons learned, problems solved, performances presented and projects completed."

"Mary D Lang Kindergarten Center has a balanced educational program that is focused on the whole child with experiences designed to expand the mental, physical, emotional, and social development of every student."

"Here at New Garden Elementary School we are committed to providing a nurturing and supportive learning environment for students to grow and feel successful while providing an excellent instructional program to meet the individual needs of all students."

"The entire Kennett Middle School staff believes that it is an honor and privilege to educate and care for the most prized possessions of our community, your children. We are a school that creates a well-balanced learning environment with high academic and behavioral standards."

"KHS is very proud of our teams, coaches, and especially our student-athletes. They all do an outstanding job of representing KHS with hard work, dedication and sportsmanship both on and off the field."

Mr. Ruebeck works at Kennett Middle School and here is his story:

“I was diagnosed with Chronic Lymphocyte Leukemia in November of 2014. I was 22 years old at the time. It was a very scary time for me, as I was nearing the end of college and starting an adult life. One afternoon I got very sick and couldn’t break the fever. The fever reached 103.8 and the doctors couldn’t figure out why the temperature wouldn’t go down. I was tested for everything under the sun. Finally, the doctor came in on Black Friday morning and suggested a bone marrow biopsy. It was the worst pain ever! Later that day I tested positive for Leukemia. The next morning they started me on chemotherapy, and so my journey of living with this disease began. Life stopped for a while, but eventually my normal life began to restart. In 2016, I went for my second bone marrow biopsy and was declared in remission.

This changed my life. Through this journey I’ve met many people going through the same thing but in a different way. I started a team called Lymphomaniacs! We walk for the cause every year! I hope this year you help me celebrate my 1 year mark of remission by walking with me and sporting ORANGE!”

The students of Kennett Middle School listened, learned, walked, and wrote letters. Many students’ wrote words of encouragement to children suffering from this disease and Mr. R delivered them to Children’s Hospital of Pennsylvania. We participated in this event during physical education classes. 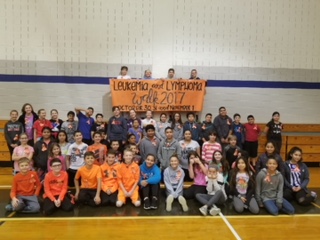 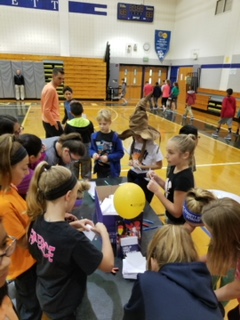 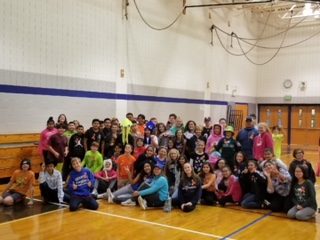